Boutique and Style Coming to Motel 6 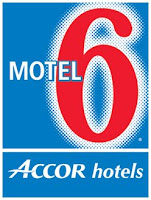 The budget, no-frills, side-of-the-road motel chain prominent on the West coast since the 1960's - Motel 6, may soon be carrying a new look and style. French-based Accor Hotels, the parent company of Motel 6, announced a 'Phoenix' prototype, which would "set a new standard for economy hotels," Olivier Poirot, chief executive for Motel 6 said in a press release.

The rooms (pictured below) would be arranged in a modern, European boutique-style design, with brightly painted guestrooms, flat-screen TV's and and hardwood floors.

Meanwhile the new, modern bathroom will feature double doors and a black granite counter top with a vessel/raised sink. The bathroom features a large vanity area with a bright decorative towel cubby on the wall that adds extra accent lighting.

“This design embodies the heart of Motel 6 – it’s no-frills, uncomplicated and efficient with a new modern edge,” said Jim Amorosia, president and COO of Motel 6 and Studio 6. “The Phoenix prototype offers the best of both worlds - an upscale feel at the lowest price of any national chain.”