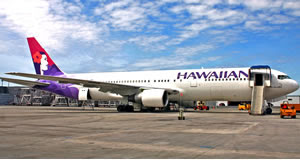 According to bizjournals.com, Hawaiian Airlines plans to launch its first ever Oakland to Honolulu Service beginning May 1st. The airline added the route in response to Aloha and ATA airlines sudden end to flight operations earlier this week. Both airlines operated non-stop flights to the islands from Oakland, and accounted for 5% of total passengers through the airport.