Strategies On Getting "Bumped" From A Flight 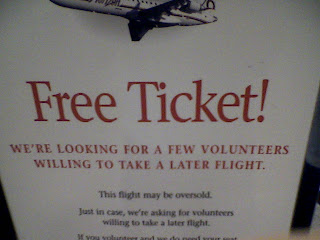 In the industry it is called an oversell and to flexible consumers, it can result in free travel.

Denied boarding, known as getting "bumped" from a flight, often occurs when an airline made more reservations than seats available - a sometimes controversial business practice that predicts some passengers will not show up for their originally scheduled flight. But when predictions are wrong and everyone does show up for the flight, the airline must bump some passengers holding confirmed reservations; voluntarily (probably going to make people happy), or involuntarily (probably going to upset people).

Here's how it works: Take for example a United flight between San Francisco and Denver on an Airbus 320. The flight has a capacity of 138 passengers, but based on several factors, the airline decides to oversell by 6% - allowing the airline to sell up to 146 seats. The airline is predicting that those 6% of customers will for whatever reason (missed connections, delays through airport security, etc) will not make their flight. When it comes departure time, any number greater than 138 (total seats) results in an oversell, and the "bumping" process begins.

Airlines will first ask for volunteers (this is you!) to give up their seats. In return, airlines will generally offer a free round-trip ticket within the continental U.S, or a voucher between $200-$400 valid for future travel, in addition to putting you on the next available flight. Situationally, amenities such as higher compensation, food vouchers, hotel stays, and first class upgrades can be negotiated. Sounds great, doesn't it? But, absent willing volunteers (where are you?) the airline will begin to involuntarily deny boarding to some unlucky passengers. It is for this reason, the practice of overselling flights is frowned on by some.

Let's stick with you graciously volunteering to give up your seat. Here are some tips:

1. Overselling the flight does not mean the airline will need volunteers. And just because they ask for volunteers doesn't mean they will end up needing them. Most of the time, the determination of whether volunteers will be needed and/or utilized is decided at the gate.

2. Assume you are not the lone volunteer. If the gate agent announces they are looking for volunteers, walk (run) yourself to the podium to ensure your volunteer status is noted.

3. If you have information that your flight might be oversold (methods on how to do this previously discussed on inFLIGHTout) you can be proactive and inform the gate agent you are available, if needed.

4. Don't be "gate lice." Oversold flights are extra work for already fatigued gate agents. They don't need passengers constantly nagging them about their volunteer status. Once you've identified yourself as a volunteer, remain in the gate area for updates.

5. Know your tolerance for "pain". Are you OK being separated from your checked luggage? If you do accept a bump, it's likely your bag(s) will stay on the original flight. Are you OK if the next available flight out is several hours later? What if only a middle seat is available on the next flight out? If you volunteer, and after everyone else boards the plane the airline determines they don't need to bump you, how would you feel about not having overhead bin space? These situations should be carefully evaluated before you commit yourself as a volunteer.

6. Be flexible and be smart. Gate agents will want to route you to your final destination as quickly as possible. But sometimes they need to be reminded of easy alternatives. If you are trying to fly back to San Francisco, ask if a later flight is available into Oakland or San Jose. If there are no good flight options, ask if they can accommodate you on a partner airline (ie: United/U.S Air). If you are in a particularly nice destination such as Hawai'i and you are flexible with travel dates, ask to fly out the next day.

So how can you predict which flights are more likely to need volunteers? You really can't. Friday, Sunday and Holidays are busy travel dates and thus would, at least theoretically, result in more bumps. To narrow it down further to particular flights or routes would seem pointless since the airlines would quickly identify these by all the previous bumps, and adjust future overselling downward.

Finally, besides oversells, there are other instances when volunteers might be needed. Weight restrictions hugely impact smaller aircraft, such as those that seat less than 50 passengers. Too many checked bags and/or other cargo could limit the number of passengers allowed on. Also the occasional last minute plane swaps, a larger plane for a smaller one, often mean dozens of people will need to give up their seat.
Labels: bumped on a flight, DBC, denied boarding compensation, flexible travel, free ticket, how to get bumped, oversell, oversold, oversold flight
Newer Post Older Post Home