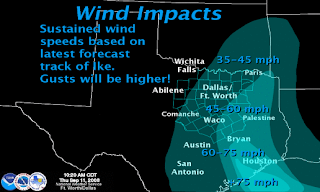 Even if you are not planning travel through the projected path of Hurricane Ike, you may be in for travel delays the next few days.

The 10am CDT advisory from the National Hurricane Center brings Ike onshore, west of Houston somewhere between a category 2 and category 4 Hurricane. Strong winds, heavy rainfall and isolated tornadoes are expected. Ike has a particularly large wind field, and regardless the actual landfall, areas up to 275 miles from the eye of the Hurricane may experience sustained tropical storm force winds.

Several flights have already been cancelled. As a result, airlines are offering alternative arrangements for passengers flying in or through the risk areas. Even if you are not traveling through Ike's path, your particular plane might have been scheduled to earlier in the day, thereby resulting in your flight to be delayed or cancelled. It is highly recommended that you check the flight status of your departing flight before heading for the airport.