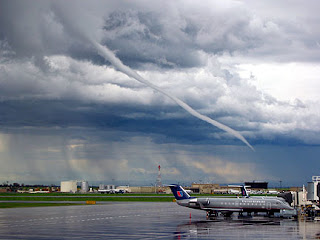 Not for the faint-hearted, storm chasing vacations allow one to get up close and personal with severe storms, and on a "good" day, even encounter tornado's.
Tornado alley as it's known, stretches throughout much of the Midwest and west of the Appalachian mountains of the United States. Although tornadoes can occur almost anywhere in the United States, including right here in Northern California (the picture to the left was taken at Sacramento International Airport), during the early summer months, storms are particularly severe and plentiful in Tornado Alley. As such, professionals and amateurs alike gather in the "alley" awaiting the opportunity to encounter the awesome power of mother nature. Speaking from personal experience, it is a feeling unlike any other.