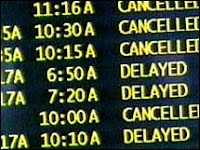 By Mike Grasso
Although there is no scientific methodology to predict if any specific flight in the future will be delayed or cancelled, there are some steps you can take to minimize the impact any such delay or cancellation might have on your travels.
1. Book flights earlier in the day. Should there be difficulties with your original flight, there will often be other same-day flights to be accommodated on. In contrast, booking on the last flight of the day means any delay or cancellation could mean spending the night at the airport or nearby hotel.
2. Pick nonstop flights. Each added segment or connection increases your odds of encountering a delay, misconnect, or cancellation.
3. Check the on-time performance of a flight you are considering a purchase on. For example, between San Francisco and Dallas/Ft. Worth, American Airlines offers several daily flights. Flight #566 departing at 2:55 PM has a 55% on-time record, versus Flight #1306 at 7:30 AM has nearly a 100% on-time record. If you are flying on American, connecting in Dallas, which flight would you want to be on? Websites such as flightstats.com can provide on-time performance data.
4. If you are using a connection city, be sure to allow yourself sufficient "padding" time to exit the aircraft and catch your connecting flight. Padding time should include a few extra minutes in the event you arrive late, the time it takes to deplane, walk through the airport and/or different terminal, and arrive at your next flight.
5. Check the status of the inbound flight. This is a bit more advanced and requires some detective work, but is my all-time favorite. Here's how it works: Determine the gate you are flying out of, then look at the arrivals board at the airport to find out if the inbound/arriving aircraft coming to your gate is scheduled to be late. If the plane coming to pick you is late, there's a good chance your departure will be delayed as well (this is not certain however since occasionally airlines, particularly at hub airports, can swap planes out for severely delayed aircraft). If the information you gathered points to a delayed flight, consider asking the gate agent or customer service rep to rebook or protect you on an alternate flight.
6. Check the weather of cities you plan on connecting in. Weather in San Francisco bay be Sunny and warm, but in Chicago they could have an impending storm. Ask a gate agent if they can proactively reroute you through a different connecting city. It saves both you and the airline from a potentially messy situation later on.
Labels: airline cancellation, airline delays, airline travel tips, airport delays, cancel, delays, frequent flier tip, inflightout.com, rebooking, travel delay, travel tip
Newer Post Older Post Home