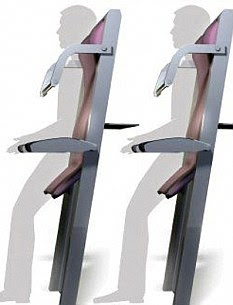 Never lacking creativity, Low-cost-carrier RyanAir said it has plans to sell standing room tickets on some of its short-haul routes. The European-based airline says it hopes to remove the last 10 rows of seats aboard flight less than 1-hour in length, and replace them with 15 rows of vertical seating. But current European Aviation rules prohibit such a "seating" arrangement, and Boeing - who supplies RyanAir with 737-300 aircraft said they are not considering standing-only accommodations.
This begs the question: A prank from Ryan Air - or something that might just fly in the years to come?
Labels: airline news, boeing, boeing 737, europe airlines, lcc, Low Cost Carrier, ryanair, vertical seats
Newer Post Older Post Home