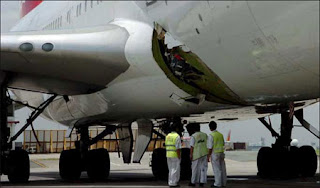 A Qantas 747 enroute from Hong Kong to Melbourne made an emergency landing last night in Manila, after a massive hole appeared in the plane.

The incident occured while flying at nearly 30,000 feet, at which time the plane then reportedly plunged, portions of the floor and ceiling collapsed, and oxygen masks deployed when the plane lost cabin pressure.

Still, despite the chaos and terror reported in the sky, the pilot managed to land the plane safely, and without injury to passengers. Read more, and view other pictures of the damage from the Sun.
Labels: air emergency, australia, boeing 747, emergency landing, Hong Kong, london, mechanical, melbourne, qantas, the sun
Newer Post Older Post Home