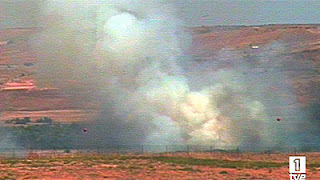 The Spanair flight carrying 172 passengers and crew was en route to Las Palmas, in the Canary Islands - a popular vacation destination.

Madrid newspaper El Mundo stated the aircraft broke into two as it crashed off the runway. Another report stated the accident occurred after a second attempt at take-off.