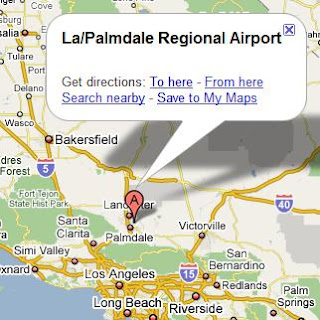 United Express will terminate flights between San Francisco and Palmdale in early December, according to Los Angeles airport officials. Over the years, Palmdale regional airport was sought after to help absorb some of the air traffic flying into nearby congested Los Angeles International.

In this most recent attempt, the federal government pumped in financial incentives to United during the first year of operations. The airline initially operated two daily flights on regional jets, then expanded to four daily flights using smaller aircraft. Unfortunately, the airline saw no significant improvement in flight loads, averaging a mere 30-40% of capacity. With federal incentives slashed, and the cost of jet fuel up, United's move to withdraw from Palmdale was probably an easy decision.
Service between the cities officially ends December 7, 2008.