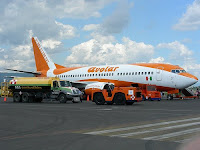 Low-cost-carrier Avolar Airlines has applied to the U.S Government to operate flights between Oakland Airport and it's base in Tijuana, Mexico. In their application, the airline asks to operate flights 3 times a day between the two cities - as soon as possible, utilizing Boeing 737 aircraft.
Avolar has operated within Mexico since 2005. In the past several months however, the airline has earned some rather unfavorable publicity after having routes temporarily suspended for financial reasons. This left some passengers stranded in Tijuana.
We'll keep you posted on the progress of Avolar coming to the Bay Area.
Labels: avolar airlines, boeing 737, g, mexican airlines, mexico, new airline routes, oak, oakland airport, tij, tijuana, tijuana airport
Newer Post Older Post Home