Reader Question: Should I Be Concerned About My Flight Being Oversold? 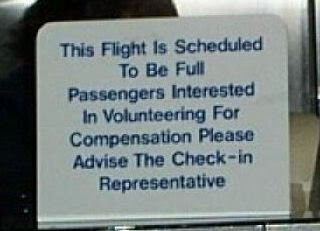 Q: I booked a trip to the East Coast for Spring Break and the phone agent said it was a really fully flight with only middle seats open. Should I be concerned about the flight becoming oversold? –Sarah in Los Gatos
Overbooking flights is a business practice in which a company sells more of a product than what is on hand. In the airline industry, that means selling more seats on a flight than physically available. There are many reasons why airlines do this, but the bottom line is not everyone is able to keep their original reservation thereby freeing up seats. Using historical records of past flights, the airline forecasts roughly how many people they can oversell a flight, knowing that an equivalent number will not show up. In a perfect world, the two balance each other out and flights leave 100% of capacity. Often this doesn't happen and the plane either leaves less than full, or the gate agent asks for volunteers to surrender their seat in exchange for compensation.

If you don’t like the concept of overbooking, try JetBlue or Virgin America, two airlines who reportedly do not oversell their flights. But even the airlines that do oversell, rarely does it involuntarily disrupt regular travelers who are intent on arriving at their destination – without delay. In the rare instance an airline is unable to find volunteers for a flight, only then does the airline involuntarily deny boarding to one or more unlucky folks. This latter scenario automatically gets reported to the federal government, who tracks the frequency airlines involuntarily disrupt travelers confirmed itineraries, to ensure they remain a relatively rare event.
Labels: airline, airline travel tips, bump, bumped on a flight, capacity controlled, full flight, overbooked, oversold, oversold flight
Newer Post Older Post Home