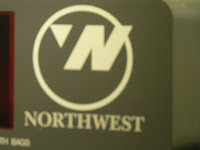 It looks like the airline industry will continue to make headlines this week as a merger between Northwest and Delta is reported to be imminent. According to the Associated Press, people close to the merger talks said it may happen as early as Monday. If it does, the joined companies would result in the largest airline in the world.

The two airlines hoped to announce a deal in February, but their pilots' unions were unable to agree on how to merge their seniority lists. The airlines are now hoping to proceed with merger talks without compiling a list, a move that could potentially cause strong opposition to the merger by pilots.
Labels: airline, airline merger, airline news, Delta airlines, delta.com, dl, northwest airlines, northwest airlines nwa, nwa.com
Newer Post Older Post Home