Thumbs Up to Super Shuttle for Really Pulling Through

Just a quick thanks to SuperShuttle in the greater Washington D.C. Area. A few weeks ago during the east coast blizzard, transportation came to a halt - in the air and on the ground. When the snow and wind ended, everything was a bit slow to return to normalcy. The subway service to the airport was still suspended, and taxi's were few and far between. So I called SuperShuttle and they came to the rescue - or at least claimed they would. About three hours before the flight, they called and apologized they couldn't come fetch me from the hotel. Really!?
It seemed they over committed once the storm stopped, not realizing many streets still remained unplowed. So they offered to refund my SuperShuttle fare, PLUS all expenses to the airport. I found a nearby hotel shuttle with one seat left - paid the $30 and away I went. Best of all, SuperShuttle cut me an expense check within 10 days - no follow-up necessary. Way to go SuperShuttle for making things right!
Labels: airport transportation, bluevan, review of supershuttle, super shuttle, supershuttle.com, washington hotel 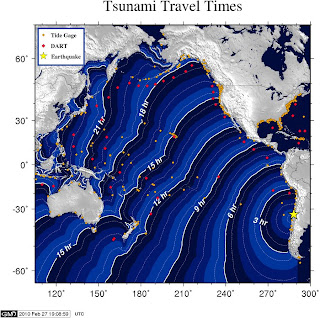 Since coverage was initiated last night on the powerful 8.8 quake in Chile, Tsunami advisories and warnings have spread throughout the Pacific. In addition to travel disruptions in Chile, other areas throughout the Pacific may be impacted. In the state of Hawai'i where tsunami sirens have sounded and officials are preparing for at least some *minor* coastal impact.
Hilo airport has been closed, and many coastal beaches and residences evacuated. The Honolulu Star Bulletin reports evacuations in Waikiki are going smoothly. As a precautionary measure, most airlines have issued travel waiver allowing customers to postpone travel to the islands. According to the Pacific Tsunami Warning Center in Ewa Beach, HI, the initial Tsunami impact will occur around 11:00 HST (about 1pm Pacific).
Photo from the Tsunami Warning Center. Click to enlarge
Labels: airline travel, breaking news, chile, earthquake, hawaiian airlines, honolulu star bulletin, severe weather, tsunami

Beginning March 1st, Japan-Based All Nippon Airlines (ANA) will offer women-only lavatories aboard most of its fleet. ANA says this change stems from numerous requests from passengers for this type of service. However, the airline will permit men to use the women's restroom in certain circumstances, such as an ill-feeling passenger. Read more.
Labels: airline lavatory, ana, ana airlines, ana press release, inflight ammenities, Japan, restroom

Enter to Win a Cruise for 4 to the Galapagos Islands

By Mike Grasso
You've spent months, perhaps even years flying around the country and throughout the world. In return, you've earned yourself a mountain of airline miles. Now it's time to redeem them for "free" award travel. It sounds simple, but rarely is. Consumers, now more than ever, complain the airline frequent flyer programs are limiting availability of "free" seats, forcing customers instead to purchase tickets or fly at inconvenient times. But for the motivated traveler, willing to dedicate time, "free" tickets can still be found. Here are some recommendations:
Hopefully these tips are useful and you find a good use for those hard-earned miles.
By the way, the "free" in quotations is intentional. We have long done away with a truly free award ticket. At the very least, most airlines pass on a $10 government fee to customers. Some airlines pass all the taxes, fees and fuel surcharges, which can amount to hundreds of dollars. Nonetheless, it is at least a highly discounted way to travel.
Labels: airline policy, award availability, award travel, capacity controlled, Delta airlines, redeem frequent flyer miles, redeem miles, reduced award travel, travel tip, united airlines, waitlist

From the *wood blog comes word of a great new Westin Hotels promotion. Simply register two separate stays between February 22 and May 13th and earn a $100 Amazon gift card. Planning on several visits? You can earn up to 3 gift cards with this offer! You must register for the promo, and only arrivals between Sunday and Thursday count. Click here for more details.
Labels: *wood, amazon, hotel promotion, hotel stay, starwood, starwood hotels, westin, westin hotels, westin promo

United Introduces Seasonal Flights From SFO to Montana and Alaska

Mexicana Airlines is offering a $68+ tax roundtrip fare from SFO to Cabo. Total comes to $175 "all in". Valid on most days through May 2010, including several dates throughout April. Visit www.mexicana.com to book.
Labels: airfare deals, cheap airfare, hot deals, mexicana airlines, mexicana.com, san francisco to cabo

Priority Club, the frequent traveler program for the InterContinental Hotel Group, has taken a jab at the Hilton HHonors program for its recent devaluation of points. Recently, Hilton HHonors increased the number of points required to stay at many of its hotels by about 20%. In response, Priority Club, which includes the InterContinental, Crown Plaza, Holiday Inn and Candlewood brands, is giving away 1,000 points to their program in hopes of luring guests away from Hilton. All you have to do is register here before February 28th, and the 1,000 points will post immediately.
Labels: bonus points, frequent travel programs, hilton hhonors, hotel deals, ihg, intercontinental hotels, priority club

American Airlines to Charge $50 for Standby

American Airlines will begin charging $50 to standby for flights at the airport. That means if you show up at the airport and want or need to take a flight other than your originally ticketed one, you now must fork up $50 for that convenience. The fee applies to tickets purchased starting February 22, 2010, but is waived for American elite members, those flying in premium class, fully-refundable and military fares. American is calling the fee is necessary to improve flight operations.
Labels: airline fees, airport operations, american airlines, american airlines news, standby

Southwest Airlines has launched a $39/one way "short haul" sale good for travel thru May 25, 2010. From the Bay Area, short haul flights include all Southwest-served cities in Southern California and Nevada. For example, a flight between Oakland and Las Vegas is just $99/roundtrip, after all taxes and fees. Among the rules: Fare not available on Fridays or Sundays; tickets must be purchased by February 11th for these reduced prices. Click here for more information.
Other airlines may match these discounted rates in certain markets. So shop around!
Labels: airfare deals, airfare sale, iflyswa.ccom, short-hop, Southwest airlines, swa, swa.com

United Airlines will end the GroceryMiles program with Safeway come March 1st. The program which awards 125 United miles after every $250 in groceries purchased has been around for several years and was often considered a small extra perk (beyond to miles you might earn on your credit card) for shopping at Safeway. In an email last week Safeway said they plan to refocus the value they offered in the airline partnership into lower grocery prices. The GroceryMiles program includes other Safeway-affiliated stores such as Vons and Dominick's. Read more here.
Labels: bonus miles, dominicks, grocery shopping, grocerymiles, safeway, safeway.com, shopping discounts, ual.com, united airlines, vons

Pictures of the snowstorm here in Washington D.C.

5:00 PM East Coast time: The snow has come to an end. About 18 inches of snow since yesterday afternoon! Here are some pics from earlier today. Check out the second picture of the guy digging his car out. 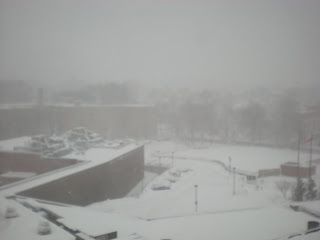 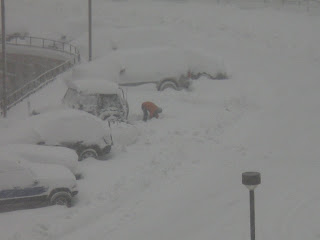 Did you catch this article on CNN Money yesterday? It exposes nine of America's biggest rip-offs, including a couple a hotels, where, for example, upwards of a 1300% markup is slapped onto in-room mini-bars. Ouch! Scroll through each of the rip-offs here.
Labels: cnn, cnnmoney, hotel news, in-room movie, mini bar, MOVIE

United Airlines has announced two new award travel options for members of its Mileage Plus program. Effectively immediately, you can now book a one-way flight for half the miles of the roundtrip award. This is great for people who don't quite have the 25,000 miles needed for a standard roundtrip. Click here for the official United announcement.
Miles & Money is another award travel option just introduced by United. If you find yourself a bit short of mileage, United will allow you to combine your miles with cash in order to secure the flights you want. Here's the announcement.
Labels: mileage plus, miles and cash, one-way award travel, one-way flight, ual, ual news, ual.com, united airlines, united airlines news
Newer Posts Older Posts Home