The U.S. Department of Transportation said that British Airways has agreed to compensate consumers for cancellation penalties and other expenses incurred due to the carrier's erroneous offer of $40 fare between the United States and India. The carrier realized its error nearly immediately and removed the fare within minutes from its own website, but it remained on the websites of certain on-line travel agents for about two hours. During this time, more than 1,200 bookings were made covering approximately 2,200 passengers.
British Airways cancelled the bookings of all passengers who purchased the fare and, before the Enforcement Office began its review of the matter, offered all affected passengers a travel voucher valued at $300. Now British Airways also has agreed to reimburse passengers resulting from having relied on the erroneous $40 fare. These could include fees for cancelling flights or cancelling hotels, rental cars or other ground arrangements, as well as additional costs incurred in rebooking flights due to fare increases on previously held flights that were cancelled in order to book the $40 fare.
Labels: airline news, british airways, british airways news, cheap fares, court settlement, fare mistake, mistake fare, san francisco to india 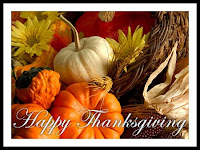 "Thanksgiving, after all, is a word of action." - W.J. Cameron

For a limited time, purchase a $100 Best Western gift card and you will receive a $10 gift card bonus from a choice of merchants, including AMC, Starbucks and Macys. Plus, if you purchase the gift card through FatWallet you may earn 3% cash back (I don't see where gift card purchases are excluded in the t&c's-but you should take a peak yourself). And, use a high yielding rewards credit card to make the purchase, and earn between a 1-5% rebate.

By Mike Grasso
It's new, it's hot, and it's all the buzz over in the Flyertalk and FatWallet forums. We're talking about British Airways Visa Signature Card from Chase - where you can earn 50,000 miles for using the card once, 100,000 for spending $2000 within 90 days. But, there are strings attached.
According to the offer, new BA Visa Signature cardholders will earn 50,000 British Airways miles upon first use of the card - enough for a free roundtrip ticket to Europe. Then earn another 50,000 miles when you spend atleast $2000 within 3 months of account opening - which scores you a second roundtrip ticket. Wowie wow!
And now the strings: As with most award ticket redemption's, the customer is responsible for paying all applicable taxes, fees and fuel surcharges. Unfortunately British Airways is notorious for being the "industry leader" in tagging these charges on. So be aware that your award ticket redemption may set you back up to $250 if flying British Airways. Also, British Airways offers limited service to/from the Bay Area, so availability for award seats, which are capacity controlled, may be slim pickins. Finally, keep in mind there is an annual fee on the card of $75.
But here's some good news: You can redeem BA miles on partner airlines, such as Japan, Qantas, and Cathay Pacific, from 50,000 miles. Or choose to use the miles for domestic trips on U.S.-based partners, American and Alaska from 25,000 miles, and the fees would likely be fairly insignificant compared to flying internationally. Something else to be all jazzed about: British Airways has a pretty robust search engine for searching award availability with partner airlines, which helps limit the need to contact the airline directly for bookings.
Overall, this offer impresses me, and may very well be one of the best deals out there. I just received my approval this week and will report back any difficulties. If you are interested in applying, do it soon as word has it the offer may be pulled by months-end.
Labels: airline credit cards, award travel, ba, best credit cards, british airways, british airways news, chase credit card, credit card offer, free flight, free frequent flyer miles

Catch a flight on JetBlue from San Francisco or Oakland nonstop to Boston or JFK for just $79/each way + tax. Comes to $179 roundtrip w/taxes and fees. Valid for travel December 2-December 16th and January 6-January 28th. United is matching the fare from Oakland, but a mandatory connection in Denver causes the fees to increase $20, for an "all in" price of $200.
Click here and search by the "flex dates" function.
Also visit: JetBlue Sample Sale (Today only)
Labels: boston airport, cheap airfare, fare sale. travelocity, flexible dates, jetblue, jetblue.com, oakland to boston, san francisco to boston, sfo-bos

Listening in on United's Channel 9

In one instance, I listened in on a JetBlue flight requesting a reroute due to a depleting fuel supply from unanticipated inclement weather. Conditions continued to deteriorate until the pilot demanded to immediately land the aircraft in a nearby city. In another example, our pilot was within 50 feet of landing on the runway at SFO when he decided to immediately abort landing and quickly ascend back up. The reason as heard on Channel 9: Onboard computer was warning of a spacing issue as another plane was landing on a parallel runway. Definitely some exciting activity and exchanges of words on Channel 9, although most of the time it is pretty tame.

Beginning next May, Air Berlin plans to operate flights between Dusseldorf and San Francisco. The twice-weekly seasonal service begins May 12 and runs through September 29, 2010, and will utilize a long-range Airbus 330 aircraft.
Labels: air berlin, airberlin.com, dusseldorf, germany, new routes, routes, san francisco to dusseldorf
"When preparing to travel, lay out all your clothes and all your money. Then take half the clothes and twice the money." - Susan Heller

Free Airport and Airplane WiFi for the Holidays

Now for a limited time, earn 1,000 AsiaMiles for booking a one-way or round-trip ticket between San Francisco, Los Angeles, New York, Toronto or Vancouver and Hong Kong and beyond - or between Vancouver and New York. You must register for this promotion, purchase qualifying tickets at cathaypacific.com, and travel by December 20th to qualify for the bonus miles.
Labels: airline promotion, asiamiles, bonus miles, Cathay Pacific, frequent flyer miles, san francisco to hong kong

In addition to the double points promotion (registration required) running through December 19th, Amtrak riders can also earn a bonus 250 points for the first Acela trip, or 100 points for the first trip on all other Amtrak trains. The new offer applies to travel between November 4 and December 19, 2009.
Labels: amtrak, amtrak guest rewards, amtrak promotion, capitol corridor

For a limited time, Amsterdam-based KLM Airlines is offering U.S residents a pair of free luggage tags. Choose one of the free designs, or upload your own. Plus enter for a chance to win a pair of roundtrip airline tickets. This promo may end at any time, so order yours today.
Labels: airline promotion, free, free flight, free luggage tags, KLM, klm airlines, luggage tags

Roundup of Travel Contests and Sweeps

Got 10 minutes to spare for a free vacation? Though so! Here are five hand-selected travel contests/sweepstakes currently open for submissions. All are sponsored by reputable, or at least well-known companies. Be sure to check out the terms and conditions with each before entering. GOOD LUCK!

Win a vacation to the Sundance Film Festival in Park City, Utah, including air, hotel and a Sundance film ticket.

Enjoy a Taste of the World, including a grand prize trip to India, from Conde Nast Travel.

Enter the Chelsea Down Under Sweepstakes for a chance to win a 6-Day Vacation to Australia, including roundtrip air on V Australia and attend a special taping of the hit E! show.