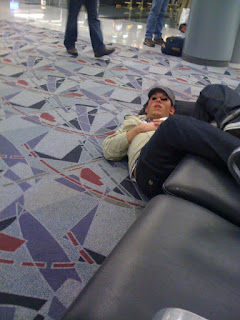 It's 8:30 in the morning at the Vegas airport and this guy is passed out stone cold in the gate area for our San Francisco-bound flight. His i-phone was laying nearby and continuously ringing (alarm clock). He slept right through it. Finally a brave woman approached, took the phone and placed the alarm into "snooze" mode. Minutes later, the rings began again.
Despite what appears like an awkward sleeping position, there were no signs he was prepared to awaken for his early morning flight.
(Photo edited to protect the innocent)
Labels: airport humor, las, las vegas, las vegas airport, sleep, sleeping in airports

What Happened in Your Hotel Room Before You Checked in?

Enjoy the humor in this, but also imagine the possibilities of what happened in your hotel room before you arrived. =) Something I learned a long time ago: Always remove the comforter from the bed as those are not usually washed after each guest checks out. This is a good first step toward limiting exposure to germs - or something worse.

Ethiopian Airliner Crashes Near Lebanon; 90 Aboard

Breaking News
An Ethiopian airliner carrying 83 passengers and 7 crew members crashed early Monday morning while enroute to the Ethiopian capital of Addis Abada. The plane disappeared from radar shortly after takeoff from Beirut around 2:30 a.m. local time Monday. Stormy weather was reported at time of takeoff. Officials are searching an area off the Lebanese coast where the plane was thought to have gone down.
Labels: addis abada, africa, airline crash, airplane crash, boeing 737, breaking airline news, breaking news, ethiopian airlines

Standard policy at most hotel states checkout time is usually no later than 12:00 - noon. But, if you find you need an extra hour or two, give a ring to the front desk and ask for a late checkout. Provided the hotel isn't sold out, they may allow a later checkout, upon request - with priority given to guests holding elite status. Also, if at first you are denied a late checkout, stop in at the front desk later and see if they can accommodate your request. Often customers cancel reservations at the last minute and rooms may quickly open up, thereby improving your chances to keep your room for just a bit longer.
Labels: elite status, hotel policy, hotel tips, inflightout, late checkout, travel tip

Win an Italian vacation for two from Lonely Planet

Save Big Bucks Using Priceline's "Name Your Own Price"

By Mike Grasso
I'm officially an advocate for using Priceline's, "name your own price" bidding program for hotels and car rentals. This past year I've saved literally hundreds of dollars on hotel rooms by using the bidding method compared to booking directly with the hotel. For example, in Boston, I stayed at a Four Points by Sheraton property for $60/night, even though the hotel site was selling the same rooms for $129! In Washington D.C., I picked up a Marriott room for $58 bucks a night which was otherwise selling for $139 on the hotel site.
But using the "name your own price" function on Priceline isn't for everyone as it has a few risks. First, it's an Opaque site meaning that although you can select the neighborhood and star-rating of the hotel, you do not know the exact hotel name you are bidding for until after your bid is accepted. Some people don't like this uncertainty. Websites such as betterbidding.com offer forums where people can post winning Priceline bid information, which can assist you in knowing which hotels might be included in your bid request. Second, generally speaking you do not earn hotel stay credit or frequent flyer points when staying at these extremely discounted rates. Finally, you are fully pre-paying for your reservation which means no changes or refunds allowed.
Overall, if you are looking for a great deal on a hotel or car rental (they offer this for airline tickets too), and you feel adventurous, consider Priceline's, "name your own price."

“Travel and change of place impart new vigor to the mind.” - Seneca 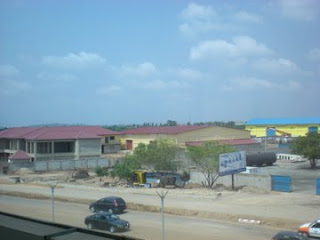 Just snapped this photo from my hotel in Accra, Ghana this morning. It's going to be a hot and humid day again today.

United to Bring Back SFO-Anchorage Flights

Should I Purchase an Air Ticket or Use Frequent Flyer Miles?

By Mike Grasso
"Should I purchase an airline ticket or redeem frequent flyer miles?" How many times I hear this question asked. Unfortunately, there is no single right answer. But let me offer some thoughts:
-If you are booking the trip "last minute" such as within a few weeks of travel: Some airlines may charge up to $100 for redeeming miles last minute.
-If your travel plans might change: Often you are allowed free date/time changes on award travel tickets (but not city or routing changes). Few purchased tickets allow fee-free changes.
-If you are flying to/from smaller regional airports: These fares often, though not always, cost more than through larger cities with more competition. It might make more sense to redeem miles if there is availability.
-If you want to earn banked and/or elite qualifying miles for your flight: Then you should buy your ticket. Typically you don't earn miles on award travel flights.
Then there is the cost factor. This will vary by person. Some people think 25,000 miles (the amount required for a free roundtrip domestic flight) is worth around $300, and will therefore use miles if the cost of a ticket is ~$300 or more. On the other hand, if the family budget is running a little tight this month, maybe redeeming miles makes good sense, regardless the price of the ticket. Again, this is more an individual/situational decision.
Labels: airline fees, airline miles, earning miles, last minute travel, question, redeem frequent flyer miles, redeem miles, travel tip

$10 off Your Nextr Southwest Airlines Flight

Because Southwest Airlines reached 1 million followers on Twitter, they are giving out $10 off coupons to all. Save $10 ($5 each way) on your next Southwest flight. Book by tonight, for travel January 21-March 1, 2010. Use this link, then apply promo code: TWITTERLUV during checkout.
Related:
Southwest Airlines on Twitter
Labels: airline promotion, com, iflyswa.com, luv, promo code, Southwest, Southwest airlines, swa, twitter

Effective today, United rolls out its co-pay system for upgrade requests. Basically, buy a ticket it coach class, then use miles and cash to upgrade to the next level of service. The amount of miles and cash requires depends on the booking class (price) of your original coach ticket and where you are flying to.
One benefit to this change: Previously, if you bought a cheap United ticket you were unable to upgrade international flights. Now you can - for the right amount of money and miles. One drawback to this change: Many higher priced economy tickets which previously could be upgraded with miles alone now require a cash co-pay as well. Here are the specifics.
Labels: business class, co-pay, first class, united airlines, united airlines news, upgrade 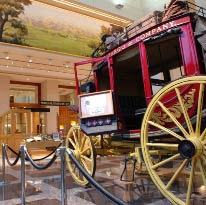 Sorry for the brief absence. Have been working day and night on a project. More travel tid-bits coming soon.

Cash-strapped Japan Airlines announced today they will join in partnership with Delta Airlines and integrate into the SkyTeam alliance. The airline had been negotiating with both American (OneWorld) and Delta (SkyTeam) for a capital partner.
Labels: aa, airline alliance, american airlines, Delta airlines, dl, jal, japan airlines, oneworld, skyteam

Similar to a promotion offered in 2009, Alamo is again renting cars out for just $10/day at participating airport locations in the U.S. and Canada between January 7 and February 8, 2010. Weekend rates begin Thursday's at 9am and end on Monday. There is a requirement to keep the car through at least Saturday night for the discount. Click here for more details & to book.
Labels: alamo, alamo promotion, alamo.com, car rental discount, cheap car rental, discount code

Oakland to Eugene $29 Each Way

Oakland to Eugene, Oregon - nonstop, is now just $29 each way on Allegiant Airlines. Discounted airfare is valid for outbound travel through March 5th. Allegiant operates flights between the two cities twice a week, Monday and Friday only. During the booking process, there are two items preselected for you - seat selection and priority boarding, which you must deselect in order to maximize savings. Click here to book.
Labels: airline discount, allegiant airlines, allegiantair.com, cheap tickets, eugene airport, oakland airport, oakland to eugene
Newer Posts Older Posts Home