Hello inFLIGHTout readers... here is my storm chasing Saturday adventure:
10:50 PM CDT - The day's recap: WOW! Today was an excellent day of chasing - one of my best ever. Although pretty scary! The storm prediction center did an amazing job in their initial severe weather prediction (see storm reports graphic below compared with their initial prediction for areas with moderate risk for severe weather). In the end, it was the hail that was the big story - with several reports of golfball and baseball sized hail dropping from the sky. This was a bit of unexpected danger as my rental car kept taking hits around 4-5pm this afternoon. I felt at any moment the windshield was going to break - as it had on other cars in the area. I quickly pulled off to the side of the road, where some tall trees and shrubs provided partial protection for me and the car. Afterward, I met up with another amateur storm chaser, to compare war stories and share ideas about what the afternoon has in store for us.
The real treat waited until about a half hour before dark. Rule #1 of storm chasing, do not chase at night! I'm sitting near Maple Grove, MN enjoying an approaching cluster of cells from the west, when suddenly a (very) nearby tornado siren began to scream. But where was the tornado? No tornado warning had been issued. But then, after chasing 6 hours, your eyes begin to play games and certain clouds begin to look "suspicious." It wasn't until a second tornado siren (now 2) starting going off, and lightning strikes were dancing around my car did I begin to wonder the escape route. But no time, a minute later, the weather radio is alarm rings with the announcement of a confirmed tornado on the ground, in a town 3 miles to the north of me!
Considering it was getting dark, I didn't have an immediate plan to withdraw, if necessary, and the confirmed tornado on the ground (moving at 40 MPH by the way!), I felt the best decision was to take myself off the course for the tornado and pull into a suburban neighborhood. Before doing so, I snapped up some great video of the approaching dark and lower wall cloud which is rapidly approaching my location. As the storm increased in intensity, straight-line winds of 40-60MPH were slamming my car in torrential rain. Fearing uncertainly whether baseball size hail might start falling, or the tornado moves into my direction, I gracefully pull into someones driveway, and partially into their open garage to take cover. Glad they left the garage door open. Thank you unknown friend. =) After 20 minutes the storms moved east.
Hail was the primary cause of damage during today's storms, but wind contributed to some downed trees. Six unconfirmed tornado's were also reported. Although I did not observe any of the tornado's (soooo close), I saw mother nature at her finest today, which made it all worth it. Will have pics of this travel adventure posted later in the week. Hope you enjoyed! 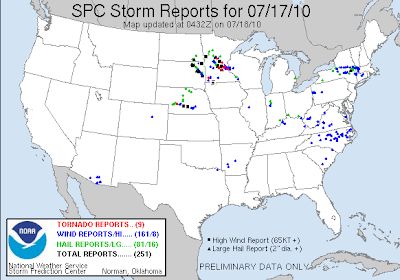 11:50 AM CDT - Currently west of Minneapolis, MN. The entire area continues to be under a moderate risk of severe weather. The primary threat will be large hail, and a few tornado's this afternoon, turning to a large wind events overnight. The first severe thunderstorm warning just got posted well Northwest of here... with quarter size hail being reported.
Labels: http://1.bp.blogspot.com/_Npj9xP47Cghttp://2.bp.blogspot.com/_Npj9xP47Cg8/TEKH3CbpO6I/AAAAAAAACb8/Qc_f9_xmn9E/s400/today.gif8/TEKHcrTmYLI/AAAAAAAACbs/KCBquJOM1as/s320/today.gif
Newer Post Older Post Home